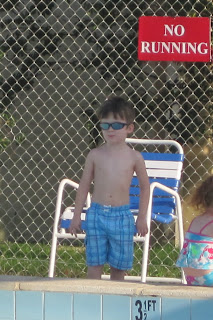 My sister-in-law was visiting this week.  This is the first time we've ever been alone together for more than a couple of hours so we were both......um, curious as to how it would go.  Let me just say, we had a FABULOUS time!  Go figure!  It wasn't super exciting, but we ate a lot of great meals, she helped out with the kids, we stayed busy, and we got to know each other a bit better.  Roarke had both dinosaur camp (9am-1pm) and swim lessons (6pm-7pm) this week so we were on the go quite a bit! 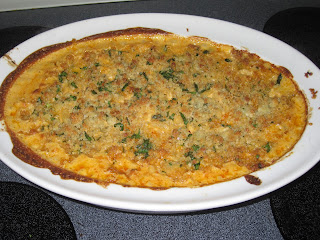 We tried to go for a walk down my little town's Main Street and have a picnic, but Cian was like an overcooked Butterball turkey--hot, sweaty, and done!  He even managed to barf all over Aunt Raven--something I found pretty funny since it was happening to someone else for a change.  We did manage a few good meals:  Artichoke-Pepper Pasta, Chicken Satay Lettuce Wraps, Chicken Korma, Curry Chicken and Bacon Sandwiches, and Buffalo Chicken Macaroni and Cheese.  The mac and cheese was AMAZING!  If anyone wants the recipe, just leave a comment and I'll email it.  It was the most yummy thing ever!  Three kinds of cheese--you can't go wrong!

After the kids were down for the night we would have a glass of wine and talk or watch a movie.  It was great to have some girl time!  Oh!  We also got pedicures!  My hubby surprised me this week with an awesome new pair of shoes that he picked out all by himself.  I would post a picture, but I was getting some strange comments from weirdos on Flickr so I'll refrain.

I sadly took Aunt Raven to the airport today.  Her flight was pretty close to the time Roarke had swim lessons, so I figured I would stay in that part of town since it takes 30 minutes to go back home (I didn't want to have to turn around and come right back the same way).  I had to kill two hours so I went to Target to stock up on baby food and was planning on going to the grocery store on base, but I took too long browsing at Target--figures!  I decided to go to the on base food court for dinner then go to swim lessons.  I realize after I leave Target that I have forgotten Roarke's swim trunks.  Great.  We have 4 pairs of swim trunks in his current size already and now I have to buy another!  We just sit down to dinner when Roarke exclaims he has to go potty.  Geez.  I have two trays filled with food and I'm in the process of trying to feed Cian so he'll stop the audio onslaught he's been treating me too the past 30 minutes.  I hoover my food while I try to encourage Cian to do the same, scoop up all of Roarke's uneaten pizza and juice and make a mad dash to the bathroom.  I was planning on sitting back down to let everyone finish eating, but I realize the BX (military department store) was about to close and I still hadn't bought his trunks.  We race in (of course toddler boys clothes are in the VERY back) where, thankfully, they are all marked down 50%.  After our purchase we need to get going so I put dinner on hold.  We run out to the car where I strip Roarke down and put his trunks on and hop back in the car to race to the pool. (insert loud clap of thunder and lightning).  Lovely. We drive back home in a torrential downpour.  When we pull into the driveway I find my garage remote no longer works and I have to jump out to use the key pad.  Great.

It's good to know things go back to normal so quickly after a house guest leaves. :)

Little to say craft-wise.  Tried working on my block for my Christmas bee.  I'm supposed to do a pinwheel and then another of my choice.  I tried to do the pinwheel, but I've ripped it up three times because I can't get the points to meet precisely right!  Arrrrrrr!  If anyone has a good tutorial or tips on this, let me know!  I think I'm going to work on the block of my own design and take a breather from the pinwheel! 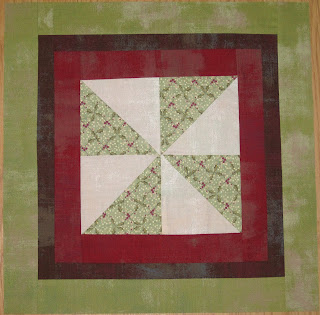 Update:  I finished my pinwheel, though I "dumbed" it down a bit.  I had a more elaborate plan, but I've discovered pinwheels aren't my thing so I made a more simple block.  I must pull out my A game to redeem myself on my second block!
Posted by Kelly at 7:24 PM

please please send the recipe my way...my kids eat next to nothing...id love to try a delicious meal!
glad you had fun with your SIL!!
hope my comments were not the wacky ones on flickr!

Buffalo chicken mac and cheese please! That is combining two of my favorite foods.

Glad you had a nice weekend with the SIL but I'm glad things are back to normal. I'd miss your stories!!

I will try the recipe too :) I am always down for something yummy.

What a crazy day! Sounds about like the day I had yesterday. Sucks not having the hubby around to help out. I know how that goes! That explains the last 4 years of my life!

and the block looks great!

I would love your recipe for Buffalo chicken mac and cheese. Mac and cheese is a big fav in our house :)

I would love the Mac n cheese recipe and if you wouldn't mind sharing your Chicken Satay Lettuce Wraps too?

I think your block turned out FABULOUS!

Also -- you need some simple blocks mixed in to a quilt (in my opinion)... this one makes a good statement. I like it. :)