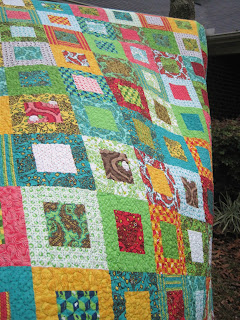 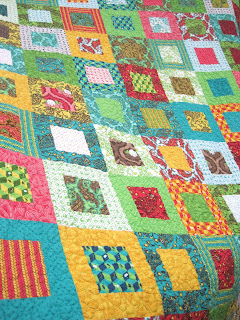 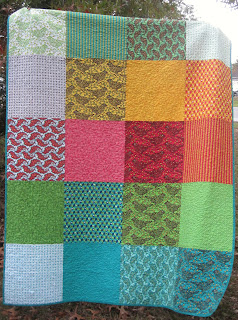 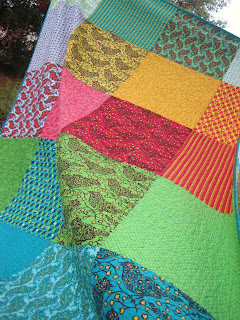 A million more to go! This is the completed quilt for my SIL and BIL. I've had the top done for a while, but I've been dragging my feet on putting the back together. After a marathon of True Blood the past two days I finished sewing on the binding. This one was quick and easy. I hope they like it as much as I do!
Posted by Kelly at 9:47 AM 5 comments:

Homecoming and a Haircut

Chad's home!  Hooray!  Six months of being a single parent are O-V-E-R!  In some ways it feels as if he never left, in others it feels as if he's been gone forever!  Regardless, we're all overjoyed he's back, especially because he made it back in time for the holidays. 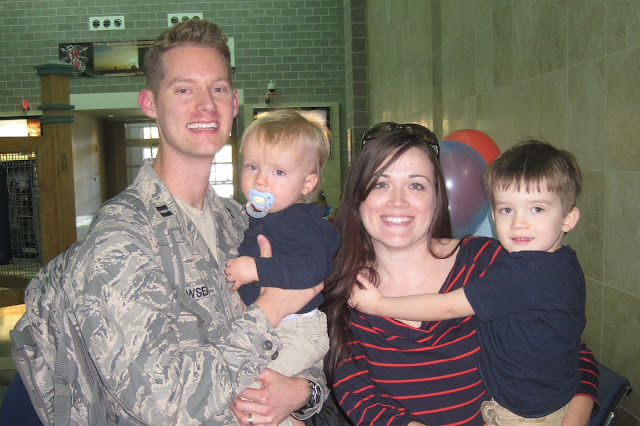 We've been waiting for Daddy's return to get Cian his first haircut.  Mama wasted no time and it was first on our to-do list today! :)  He went from this: 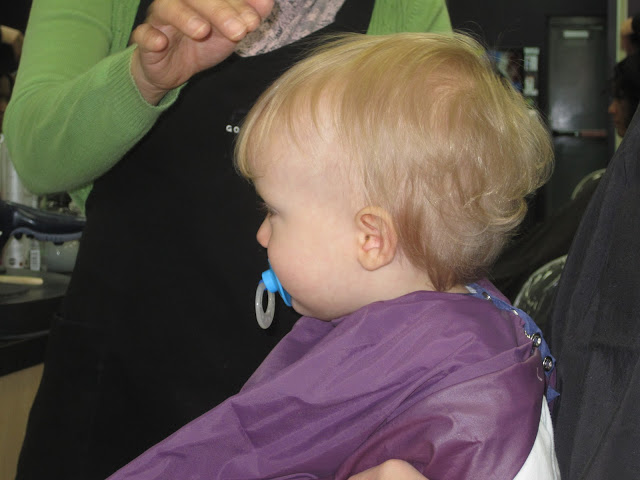 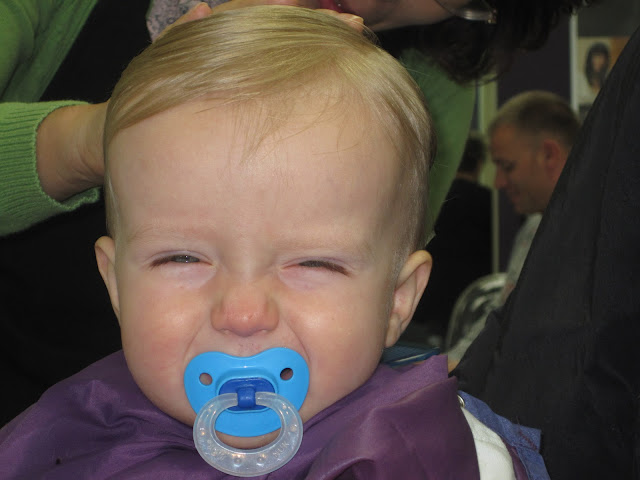 SOOOOOO much better!  He was really great the whole time and just sat in Daddy's lap.

Hopefully I'll get back to sewing soon because my list of Christmas gifts to make is loooooooong.  For now I'm enjoying some much missed family time. 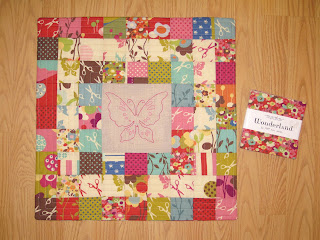 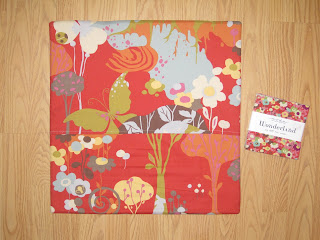 ﻿On a totally unrelated note, I'm going to vent a little about my quilting guild.  Let me start by saying this is NOT a modern guild and I knew this going in, but I thought there could still be some things to learn, ideas to share, and maybe a few other secret modern quilters.  WRONG!  I was planning on leaving the guild at the end of the year simply because I don't fit in.  I have no one to relate to or bounce ideas off of.  Most of these women are 50-80 years old.  So while they have a wealth of knowledge, our aesthetic is completely different.  Anywho.  I was coerced into taking the position of VP and to be in charge of workshops.  I thought this would be an opportunity to make the guild work for me.  WRONG!  Over the past month, I have been told, not asked, that 8 of the 12 months are booked.  Why the hell did you need me then?!?!?  Most of these are for charity projects.  While I do love that the guild is involved in a lot of charities, why are they using workshop time?  I feel like a petulant child, stomping her foot and whining, "But that's MY time!"  Beyond that, the two real workshops that have been scheduled without much discussion with me are SO not anything I would ever want to do.  This isn't to say I have to like all the workshop projects, but I've been in the guild a year and there hasn't been one I like!  Further, we have a retreat in March and, again, there is not one project I want to do so I'm not attending.  I have committed myself to this position and I won't quit because I gave my word, but I'm most displeased to say the least.  Ok, rant over.  Sorry if you were bored senseless!
Posted by Kelly at 9:38 PM 8 comments: 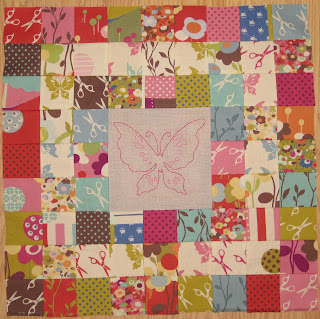 This bag pattern is featured in this month's issue of Stitch.  I made a few adjustments to suit the recipient, but the pattern is very well written and easy to understand.  I can't tell you who this is for yet--it's a surprise!﻿ 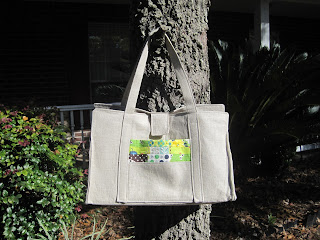 I decided I needed a name change.  My original blog name "I'm Just Saying" is a joke with my mom.  Anytime we say something the other doesn't want to hear, it's followed by the comment, "I'm just saying!"  As if that will smooth any ruffled feathers. :)  Anywho!  I thought "kelbysews" was more in line with the content and character of my blog--I actually try to avoid saying anything that will ruffle feathers on my blog!  Just thought I'd let you guys know the reasoning behind the switch.
Posted by Kelly at 10:26 AM 3 comments:

I'm feeling very unmotivated lately and now is NOT the time!  I have tons of gifts to finish, bee blocks to make, and new projects I want to start.  I think a lot of this has to do with my newly cleaned dining room.  My son recently had his 4th birthday party (a costume party) and I cleared out most of my fabric/sewing paraphernalia from the dining room and it just looks so clean I hate to mess it up again! 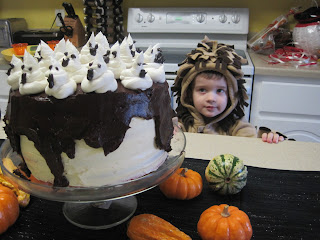 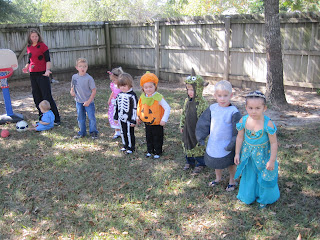 I did manage to make the favor bags for the party.  It felt really good to use up some of my stash fabrics.  A lot of these prints I just didn't know what to do with.  I liked them, or thought they would be good for kids, but I didn't have anything planned for them.  Yes, I actually have a plan for a lot of my fabric.  It's going to take me years to make everything I have planned, but there is a plan!
I have three bee blocks to make.....soon!  I also am WAY WAY late sending Tracey a siggy block.  I did finish Cherie's blocks and siggy block, but I realized today when I was going to stick it in the mailbox that I'm out of larger envelopes.  Sigh.  I'm so not motivated to go to Walmart or the Post Office.  Oh, Sylvia, your giveaway win has not been sent either for the same reason.  I guess I'll drag my lazy behind to Walmart tomorrow.  I did manage to list some Neptune on etsy.  It actually feels nice to destash.  My list of projects was getting overwhelming so I decided to part with some fabric that would bring in a little money to sooth my hubby and would erase some projects from my to-do list. 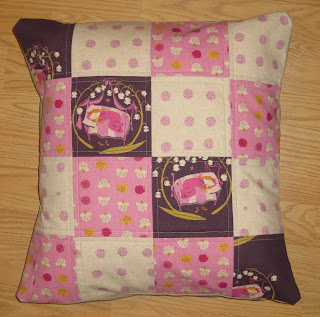 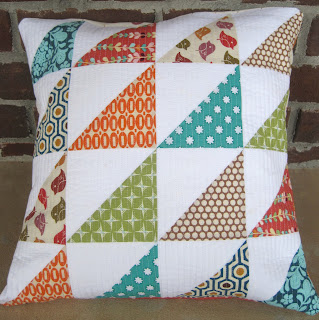 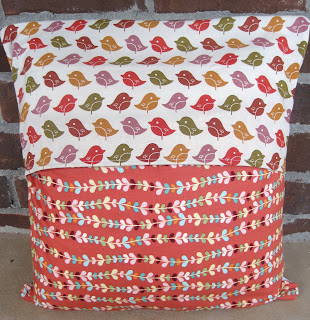 I made two pillows a few weeks ago and I decided to list one on etsy.  I don't really hold out a lot of hope it will sell, but I don't have a need for a princess pillow so I thought I'd see what happens.  I made these as practice pillows.  I signed up for the Pillow Talk Swap, but I'd never made a pillow!  I made the "fall" one first and I really liked it.  It was not very thought out, I just grabbed some colors I though looked like Fall and went with it.  I think I need to make the covers a bit more snug, or get plumper pillows.  I was nervous they wouldn't fit so I have an extra little room.  Oh well.  Better that than too small!
Oh!  I'm almost done with my Modern Swappers package.  Well, that's not entirely true.  I have one project done and other projects picked out, including the fabric for those projects, and the fabric portion of the swap is ready.  I'm hesitant to finish because I'm no good at secrets and I'll have to keep everything to myself until December!  There's no way I can post a picture because my partner will know immediately it's hers.  I guess she may not care, but I think that kind of ruins the fun!  Anywho!  Let's hope I feel motivated soon and get some sewing done!
Posted by Kelly at 6:21 PM 3 comments: