I'm almost done with my homemade Christmas presents!  I have one last project, and it's a biggie!  I'm making an anniversary quilt for my hubby's grandparents who were married on Christmas day over 50 years ago.  My Putting the Bee in Christmas ladies helped make most of the blocks, but I'm making a few.  I've completed 2 of the 3. 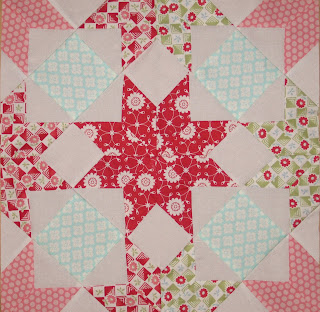 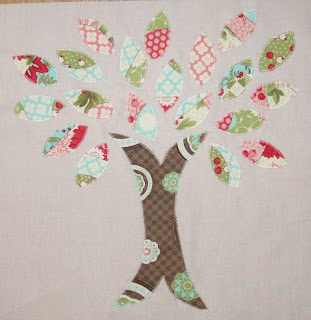 I've made the tree before (for pillows) and it's quick and easy so long as you can applique.  The design is from Cluck, Cluck Sew's tutorial if you're curious.  The other block.....well, let's just say I must have been a bit touched in the head when I chose that one.  All the pieces had to be cut from templates, there are in set seams everywhere, and when I finished it was a whole inch larger than it should have been!  I was not pleased.  Hubby made me a margarita and I'm feeling much better now.  I guess the bright side is it wasn't too small.  You can always cut it down, but it's hard to make it bigger---except with borders! :)  I almost gave up after getting the middle red star together.  I thought, "I should just add borders and be done," but I thought that was the wimpy way out.  Quilting hides lots of mistakes, right? 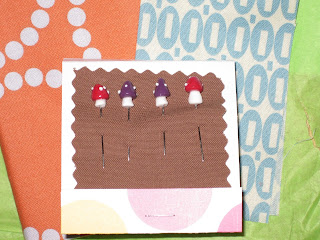 Totally unrelated, but Jules sent me these AWESOME pins today--she made them!  How stinkin' cute are these?
Posted by Kelly at 10:47 PM

Your blocks are gorgeous! I can't wait to see your finished quilt!

I can't wait to see your quilt either! The blocks are great Kelly! :)

The quilt is going to be beautiful!

That block is spectacular. I love it and they will, too. :)

Nice!!Fantastic creation.The tree that you made here is beautiful.Thank you for sharing this great work with us.it is one of the best blog that i ever visited.I really like this.All the readers may get some useful information on reading this.Visit Best Dissertation Writing Service to get more articles like this.