I'm finally back home after a week-long visit to my in-laws in Missouri.  It was a great trip!  My in-laws are so great about helping with the kids!  I've put together a few pictures to summarize our trip: 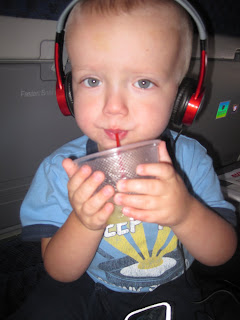 Cian enjoyed his juice and his tunes on the flight!  Overall, our trip there was uneventful.  No one cried, all bags and car seats made it safely, minimal stress on us parents.  It was a long day (12 hours from the time we left the house to make our red eye flight until arriving at the in-laws), but we made it! 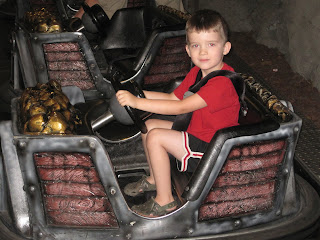 The trip was filled with firsts.  This is Roarke's first time on a bumper car!  He loved it! 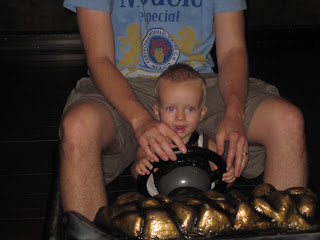 Cian (with Daddy's help) had a blast too! 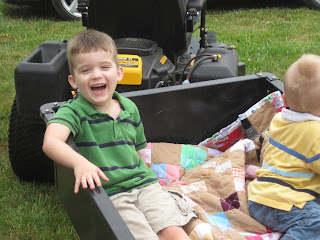 Hogpa (my father-in-law) gave the boys a wagon ride via his riding lawnmower.  Roarke loved it, but Cian wasn't so sure. 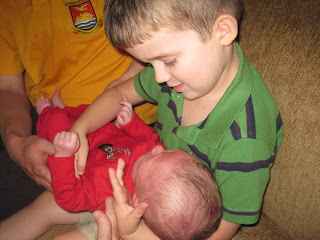 Roarke got to meet his first (and only) cousin, Ezra Stegosaurus. 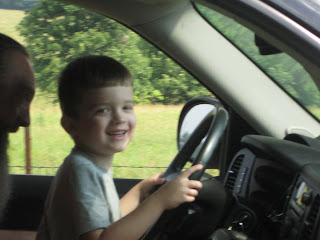 Roarke got to drive for the first time!  This was on Roarke's great-grandparents driveway.  They live on a farm and have a long driveway so my father-in-law thought Roarke would love to take the wheel.  Obviously, Roarke had a great time.  He thought he could drive everywhere after that! 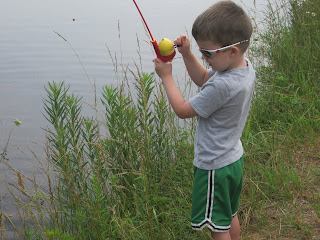 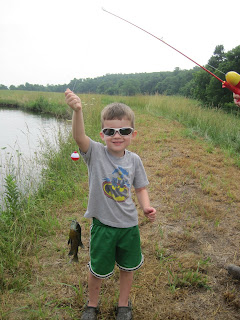 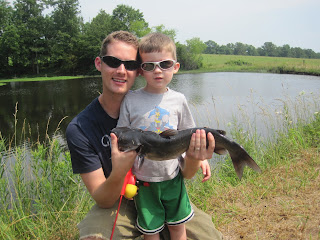 He reeled in that large catfish all by himself! 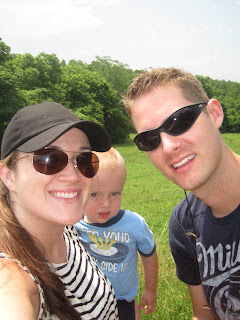 Roarke was too busy fishing to join in the family photo op. 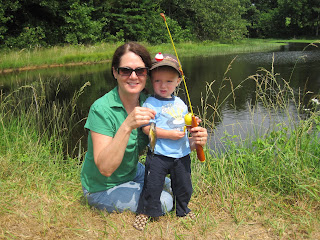 Cian even caught a fish with Grandma's help. 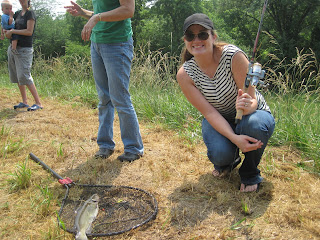 Yes, even I joined in the fishing fun.  To say I'm not outdoorsy is putting it mildly, but I figured I'd give fishing a shot.  I was great at casting, not so good at reeling!  I lost two before I managed to get this one.  I wasn't going to touch it though!  I don't eat any type of seafood and I certainly wasn't going to stink up my hands with a live fish! 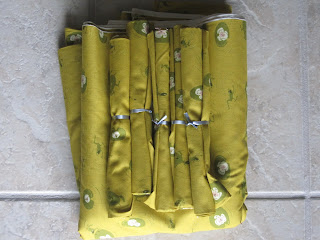 I did manage to squeeze in a little fabric shopping.  I ran across almost 8 yards of this Heather Ross West Hill print at a store near my in-laws.  There was not one other recognizable piece of fabric in the store--think batiks, Disney, camo, and denim!  They only had this because the town has a Frog Festival and the owners thought it would sell!  I'm going to be listing some in my etsy shop soon.  I have to say thank you to my hubby for making a U-turn and going to this shop.  I am constantly on the look out for fabric stores (I'm not the only one, right?) and we had already passed the store before I could yell out "FABRIC!"  He very nicely turned around and went back.  Awwwww! 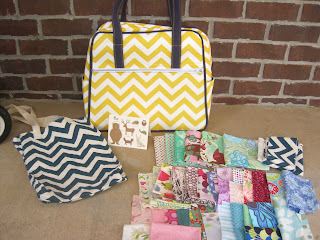 When I returned home, I opened the most spectacular package from Ali for the Goodie Bag Swap!  Can you believe it?!?!?  She really outdid herself making this Amy Butler Weekender bag.  It's huge and perfect and MINE!  I love it dearly!  As if that wasn't enough, she also made me a grocery tote and included some great fabric! 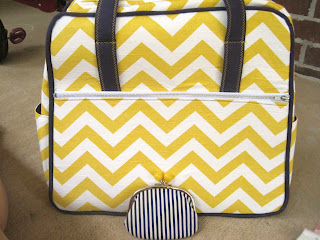 Kaelin made my awesome pouch for the Pretty{little} Pouch swap and conspired with Ali to make matching items.  Swoon!  I'm so stinkin' lucky! 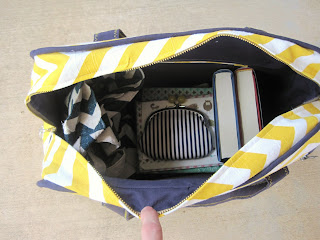 Yeah, the bag is monstrous!  I could probably fit my kid in there!
So that's it!  My week condensed!  I'm already busy sewing now that I'm back.  I've managed to cut out all my squares for a twin size Warm/Cool quilt for Jeni's quilt-a-long and I've started working on my pillow for Pillow Talk Swap 5.  Here's what I've finished so far--it's 24" square and made from linen, Heather Ross prints, and Flea Market Fancy.  It's paper pieced (block is from www.quilterscache.com).  I made some seriously stupid mistakes while doing this, but I managed to correct them after some seam ripping and cursing. :)  I can already tell this one will be hard to let go! 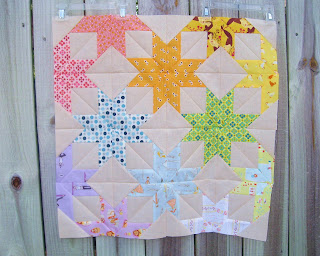 I'll leave you with a funny story from our trip:
On our way back to the airport--which we had to get up at 130AM to arrive on time for our 6AM flight--we stopped at Krispy Kreme for donuts and coffee.  The boys were asleep, but while we were waiting for the coffee, Roarke woke up.  He started talking loudly as he was rubbing the sleep out of his eyes.  Afraid he was going to wake up his brother, I quickly handed him a piece of donut to put in his mouth.  Unfortunately, he thought I was passing him a cloth to wipe his eyes and he rubbed the glazed donut in his eye!!!!  I was crying I was laughing so hard!  I will never look at a Krispy Kreme again without thinking about him smashing that donut in his eye!  Classic!
Posted by Kelly at 12:17 AM

Oh my gosh!! Poor Roarke - lololol Hope that donut wasn't too painful in the eye! Awesome fish he caught. I'm with you - if I ever catch a fish, I'd be leaving it on the ground, saying, "OK, so, if we're keeping this somebody should put it away." hehe.

LMBO!!! That story about the donuts is priceless! Too bad you didn't get a picture of that moment!

Well we found one thing that is different, I love seafood! :) Plus I really didn't have much of a choice but to fish with I was a kid. My Grandpa made it a family requirement. :)Plus I grew up in Michigan and there isn't much to do other than outdoors stuff. I'm with you though...city girl!

Looks like you have a wonderful trip. I missed you :)

oh Kelly you're killing me with that pillow top! It's gorgeous!! Love it!

Sounds like you all had a great time. I can't wait to see your progress on your quilty projects!

Your boys are so precious! I couldn't get over how much he looks like a mini version of your hubby in that catfish picture - they're so cute in their matching sunglasses!

Love your pillow top! What's the name of the block? Quilter's cache is huge! :)

I would love to know the name of the block too. The pillow looks awesome!