Oh Target, How I Love Thee! 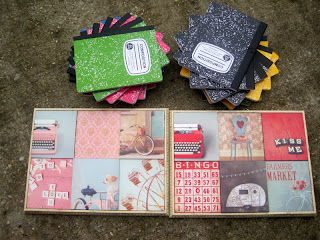 My Flickr friend, Dar, posted pictures of these two art/photo frames yesterday and I had run out to Target to get them (after going to the gym this morning)!  I also scored those composition books for 28 CENTS each!  I was giddy.  I got 20, but I almost wish I would have bought more!  While the boys and I were in Target, the rain from Tropical Storm Lee began so we got completely drenched going to the car--but it was totally worth it!  Next we went to lunch at Panera.  I felt totally righteous eating a salad, but I killed that feeling with a Toffee Almond cookie.  Again, totally worth it!  Hubby is in NY having a Bachelor Party Weekend for one of his friends, but I'm having my own good time.  Geez, how sad is it that Target and Panera are the definition of a good time for me?  Lame! 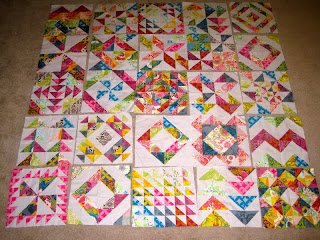 Last night I got out all my bee blocks (from Twice Around the Block and VIBs) and started playing around with the layout.  I think I have one or two to switch around and then I can start sashing.  I love how these turned out!!!!  I didn't have to make one since some of the ladies made me two blocks! 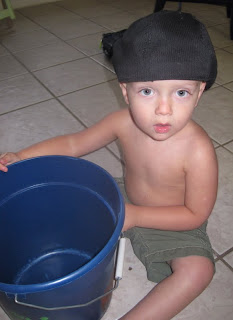 I'll leave you with a picture of my youngest cutie pie!  He loves to put on hats he finds in the house.
Posted by Kelly at 3:07 PM

Great haul, great blocks and great hat! I have a 6 year old who wears a fez!

Excellent! I bought a bunch of composition books this year, but I wish I'd gotten more! Such a bargain. Lee is headed our way tomorrow, so maybe I need to head over to Target before it starts raining.

Love that quilt! Do you just love back to school sales? I've stocked up on enough glue sticks, pencils, and crayons to last us three years. I should have bought those composition books too!

I love Target and the back to school specials are my fave just like Kati.

So happy to have found your blog! Cute little guy. :)

Those prints look like they'd go well with the new Hometown fabric.

And you know... Target and Panera sound pretty great to me too. ;)

What are you going to do with all the notebooks? I have a feeling you have something fun and creative up your sleeve!

Love how your Bee quilt turned out, I love seeing the Bee quilts come together...

Your youngest is such a cutie pie!!!

totally going to go get me some of those composition books for 28 cents! that is crazy! and seriously, i LOVE panera! there is not one to be found anywhere near idaho. super bummer. i still have dreams about their chicken salad sandwich! mmmmmmm.... my mouth is watering!

cute art frames - I'll have to look for those!