Some Finishes and Sadness 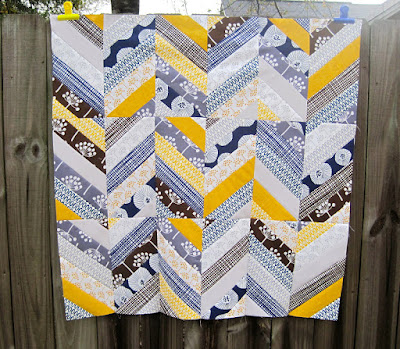 I cut into that awesome stack of fabric from my last post and made this!  I used Holly's tutorial for the herringbone blocks.  This went together sooooooo fast! It produces a lot of waste, but I love the final result so much I don't even care.  Plus, all the scraps resulted in a large scrap swap with a friend! 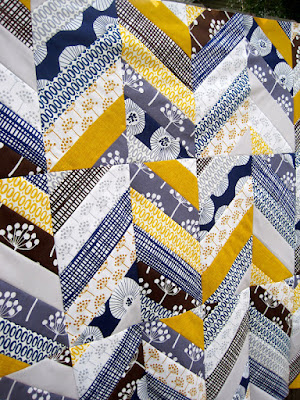 This is yet another quilt for my friend Sara, the quilt-o-holic!  I can't wait to see pictures of cute babies on this one! I had a few larger scraps left over from the Herringbone quilt so I made this simple patchwork rectangle. It wasn't that large so I added some borders, did some simple "organic" quilting lines and bound it in one of my favorite things, AMH pre-made binding! Voila!  I was going for modern and a bit unexpected with the off center patchwork.  This one sold over Instagram (an iPhone app) if you can believe it.  It's destined for a cute little boy in Tennessee! I've been playing around with this stack lately.  This is a Pintrest-inspired combo.  Hopefully it will look as pretty in quilt form as it does in my pin! As all my Flickr and Facebook friends know, we had to put down one of our dogs (Bailey) this week.  She was 14 and could no longer stand up on her own.  It was heart wrenching to watch her try and try to get up and follow me around.  Thankfully the process was very quiet and gentle and she seemed to simply fall asleep while I held her head.  I know we made the right decision, but it's so painful to catch myself looking for her or calling for her only to remember she's no longer here.  When I reach for only one dog bowl I feel like crying.  I've been more emotional than I expected because the entire event brought back so many memories for me.  Most of you don't know, but our first child died when he was 25 days old.  It's a really long story, but, in a nut shell, he got an infection and had an unusual reaction to it.  We had to make the decision to stop his treatment because his body was simply too tired, he was ready to go.   I was so scared I was giving up too soon, not giving him a chance, despite the doctor's reassurance.  I felt the exact same way with my dog.  I held them both as they took one last breath and I prayed all they could feel was my love.  Pure, honest, unconditional love, they deserved nothing less.
Posted by Kelly at 8:43 AM

I haven't been able to stop thinking about you both....I found myself hugging Wrigs and loving on him more than usual. And he seemed to want it unlike his normal, leave me alone grumpiness. I am sure both of those precious beings did feel every ounce of your pure love. Love you girl and praying you all!!!

So sorry for your loss. That brings tears to my eyes. I admire your strength.

I'm so sorry for your losses - they are both profound. Blessings as you move forward.

sending so much love and so many hugs to you across the miles. <3

the quilting does ya good, no? XO

So sorry for your loss (((((HUGS)))) Beautiful Echo quilts though

Oh I've got tears in my eyes for you. I think the kindest thing that you can do for someone you love is hold them and love them as you quietly say goodbye x

I'm so, so sorry. You are in my prayers today.

Aww, Kelly. {{{{ }}}} I'm so sorry for your pain. You undoubtedly made the right decision both times. Hang on tight to Roarke and Cian and let them help your heart heal again.

A huge virtual hug to you! I know you made the right decission; I had to do the same in Oct 2010 and I still look for my dog when I come home, when I open a can of tuna and so many other times. I have only this past week taken out a box of HST I sewed the last 2 days he was in my sewing room with me. I haven't been able to face them up to now. I was lucky that the vet came to my house and my dog went from sleep to a better place for him underneath my sewing machine table with his head in my lap. I will never have a dog again (I promised this would be the last) but at 13 he had had enough so I could not put myself first but did the only decent thing one can do for a loved one. Take care

I could never ever imagine. I hope you have a safe place to grieve -- I've always been so proud of you, because you have allowed your pain to build character and perspective instead of bitterness. Much love to you...

It's never easy to say goodbye and to make these decisions. You have a virtual hug from me.

you gave them both your best. Thinking of you.

I am so sorry for your loss. It is hard to lose a part of our family, especially when it brings up so many other feelings. I'm sending you a big hug!

But seriously, I am so sorry to hear about your dog. I can't imagine mine being gone. Thinking of you and your family.

I'm so deeply sorry for your losses.

Such a hard time for you! I'll be sending out lots of prayers for you and your family! :)

hoping today is a little easier... knowing it probably is harder...
sending hugs your way...

Oh, Kelly! I'm so sorry for your loss and the sad memories it brought up. I hope creating your beautiful quilts brings you some peace.

kelly, there are just no words... so i will say very simply, i'm so very sorry for your loss. i can't imagine the pain this has rekindled in your soul. lots of hugs and prayers for you from tennessee!!

I know exactly what you are going through! I have been crying all day as I had to call our vet to come put our old dog (17 years)to sleep today...(not the one in my profile pic) I have been out there spending time with her as I can.. she too, couldn't walk and had lost her hearing and something was wrong with her eye and then couldn't breath or eat.. I will hold her as you did as she goes to sleep.. its so dang sad to do this but in the end they do understand and always in our hearts.. just remember your doggie didnt live that long and was not loved!!! she was well taken care of to get that far!!! HUGS!

so sorry for your lost sweetie. It's heart wrenching to loose a pet. Keep your chin up and keep creating beautiful things :)

Very, very sorry. I just gave my girl a big hug in memory of your sweet Bailey.

Kelly, first, great quilt! But more importantly, I'm so sorry to hear about Bailey. I have a beautiful black lab puppy named Seamus and he really is my baby boy, so I can only imagine how difficult it was to lose yours. Your story brought me to tears. All my best during this tough time.

I'm so sorry to read about both your child and your dog. I understand completely when you wrote about being scared you were giving up to soon. I felt the same when we put our sweet kitty to sleep. It is such a hard decision to make but is really the most loving thing you can do.